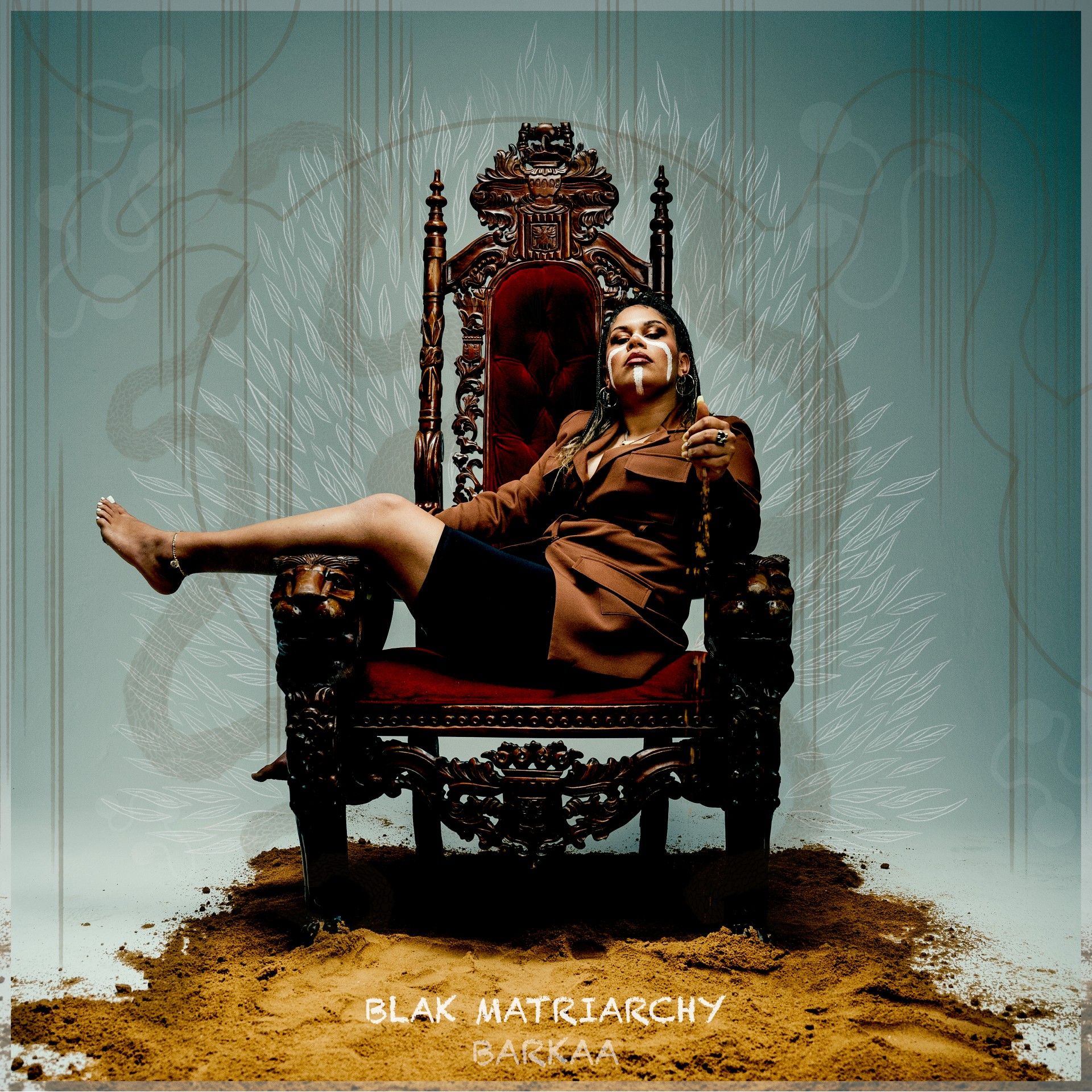 BARKAA says on the EP:

“Blak Matriarchy is an embodiment of my Matriarchal Ancestors, My Grandmothers, My mother, My Aunties, my Sisters, my nieces, my daughter and myself. It’s a testimony to the powerful Blak women I am blessed to witness and know in my life. It’s a dedication to the women who’ve walked before me, paved the way and to the women who will walk in those footsteps and keep paving a future for our daughters.

I put my heart into these tracks because that’s all I’ve ever known how to do things, baring my heart on my sleeve and speaking from it. I wanted to dedicate this EP to all the sisters across our many nations and tell them how valued and worthy they are, how blessed it is to be a Blak woman and want to instill how powerful and amazing all my Blak sisters are.

My message to my Blak sisters:
Don’t let assimilated views, colonised minds and colonised perceptions dictate how worthy and beautiful you are my Blak sisters, you are the creators, you are the change makers and you are sacred to this Earth and to our people. I am a Blak woman, I am embedded in our Mother Earth and she is within me. We are our mother, we are the Blak Matriarchy.”

Eponymous opening track, “Blak Matriarchy” is a testament to Blak women, as BARKAA’s opening address to discrimination harnesses her inner strength to rise up in a colonised country that has not always made her feel welcome. Directed by Selina Miles and produced by Scoundrel and Vyva Entertainment, arriving today is also an impactful music video for the title track, bringing BARKAA’s dedication to life featuring the faces of strong, empowered, creative, resilient; Blak Matriarchs. A fast and dynamic run of verses is next followed by “Gods”, seeing a slowed-down rhythm and horn flourishes accompany BARKAA’s step to the mic. A determined vision to keep rapping while embracing motherhood, and acknowledging the ancestors behind her every step of the way, embodies the two-step beat.

Third track, “King Brown” invokes a percussive-led trap beat as BARKAA skips along to the Reggaeton mood with ignited fury and an impassioned vision. Next, BARKAA directs you to salute the Matriarchy as she hisses razor-sharp raps on “Bow Down”,accompanied by a sparse and slowed down  beat. Fifth track, “Come Back” feat. Mi-Kaisha is a diary-led entry of BARKAA’s experience that sheds insight into the forces shaping her current perspective of gratitude for her current mindset, and crystal-clear path of empowered Blak motherhood. Final track, “Groovy – Remix” is the stylish swansong to an EP that affirms BARKAA’s place in the scene as a heavy-hitter with her groove back, joined by some of her Bad Apples Music family with verses from Briggs, Nooky, Kobie Dee and Birdz.

Since releasing her debut single, “For My Tittas” in 2020, BARKAA has swiftly climbed to the top as one of the most respected voices in so-called Australia’s hip-hop community, known for her world-class raps on her culture, contemporary issues and more. From numerous live performances, including a special event at the Sydney Opera House, to appearances on Rage, BARKAA’s team ups with DOBBY on the track targeting black deaths in custody, “I Can’t Breathe”, and Mackridge on “22CLAN” have served as testament to her people. Awarded 2020 PUMA Rookie Of The Year Award by Acclaim Magazine, featured in GQ and named one of the top rappers in the country by triple j and Red Bull respectively, BARKAA’s star power is fast rising. Most recently, BARKAA has been announced as part of the #YouTubeBlack Voices Class of 2022, appearing alongside some of the world’s most exciting and boundary-pushing artists on billboards across New York City, London, Atlanta and Los Angeles.

Today, listen to the supremely crafted arrival statement of esteemed Malyangapa, Barkindji woman, BARKAA as she celebrates Blak motherhood and delivers one of the year’s most anticipated EPs in rap, Blak Matriarchy.

BLAK MATRIARCHY EP IS OUT NOW VIA BAD APPLES MUSIC