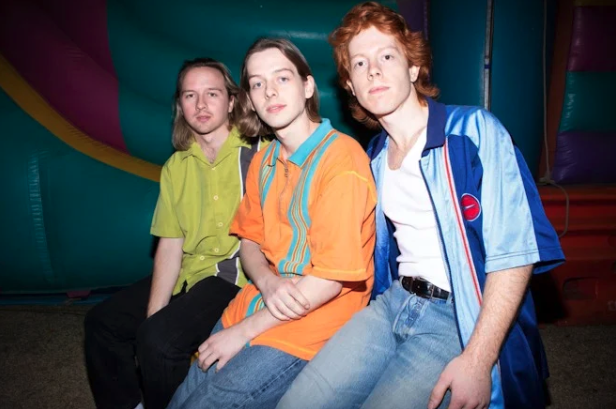 Alt Fiction have unleashed ‘Why Are You Still Here?’, a defiant, roaring single that’s injected with juicy pop hooks and enormous riffs. It’s the most energetic cut to-date from the Queensland-based brothers Mitch, Matt, and Will Tyler; and it serves as a first taste of their forthcoming debut EP.

Following on from their anthemic track ‘Yesterday’, ‘Why Are You Still Here’ is an extension of that sound, delivering a single that’s simultaneously ambitious and familiar. Receiving its first play on triple j’s Home & Hosed, the new single feels like a slight sonic throwback to indie pop bands of the late 2000’s early 2010’s, it’s a danceable, bold statement destined to be the energetic peak of their live shows.

It was at British group The 1975’s live show that the trio came up with the song’s idea. During their show, after an interlude video was played featuring young climate activist Greta Thunberg, a group of concertgoers started booing.

“It got us thinking about how there’s always a group of people that just go to gigs just to get a shot for their socials, ruin the experience for other people, and are just generally crappy,” they say about the experience.“If you can’t put down your fucking phone then why are you still here?” they sing pointedly in the rousing chorus over a beat that’s both angry and liberated. Coincidentally the pop groove of ‘Why Are You Still Here?’ is reminiscent of The 1975’s most upbeat moments. It’s an influence that has never really crept through their music before, but it was an intentional move to begin this new era with something “different”.

While the song shines with a sort of masterful polish you’d expect from some of the biggest bands around, Alt Fiction have kept the process proudly DIY. It was written in the “infamous caravan by the beach”, the birthplace of most of their songs, and produced by frequent collaborator Chris Collins (Middle Kids, Skegss).

Accompanying the release of the single, is their DIY official video which the trio reveal, “we don’t consider ourselves filmmakers by any means – we’ve sort of ended up making music videos out of necessity and just out of pure luck they turn out alright. “

$0, 2 days and an iPhone – those are the ingredients that make-up their latest visual creation.

“We’ve made music videos ourselves before but this one was the most ambitious for sure. We knew we wanted to involve the carnival because it’s so colorful and wild. We pretty much just dressed up in the brightest vintage clothing we could find on Depop and then ran around for two days just acting like idiots. It’s pretty embarrassing trying to film a music video at a carnival tbh – most of the footage didn’t even make the cut,” shares Alt Fiction

Watch the Music Video for ‘Why Are You Still Here?’

Intimacy has been key to their musical process since the early years. They began writing songs together in rural South-East QLD around the age of 12. Since then, they have been through plenty of iterations, moving from covering punk songs to their official debut single in 2020 ‘All My Friends’.

With four releases under their belt now, the band is taking flight, reaching audiences far beyond their humble beginnings. They’ve crashed into the scene with hooks as tight as The Strokes and Phoenix and energy as raucous as early Arctic Monkeys or Yeah Yeah Yeahs.

In a short period of time, the band have picked up some impressive accolades. They have been the triple j Unearthed Feature Of The Week and secured slots on Rage. They are also catching the attention of streamers, featuring on illustrious playlists like Spotify’s New Music Friday and Indie Arrivals and Apple Music’s The New Rock and Roadtrip Weekend. With close to 500,000 streams to their name, they’re ready to inflate those numbers with a brand-new EP.

‘Why Are You Still Here?’ fires the starting gun on their most exciting era yet. The incoming EP is made up of songs that highlight “the absolute best of Alt Fiction,” in the band’s words.