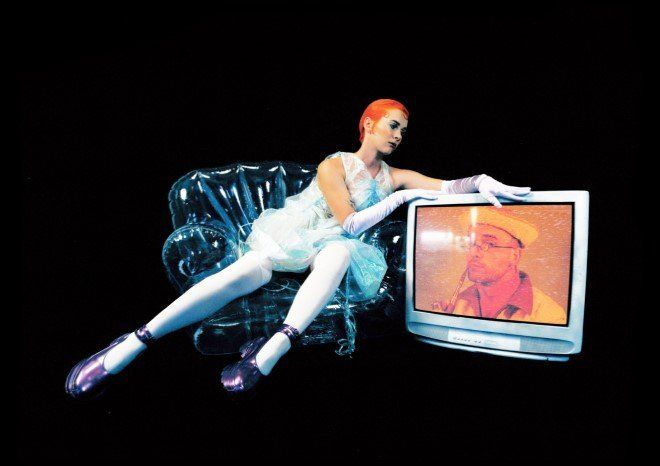 BROODS dive into the new year with the release of ‘Like A Woman’, the rousing third single from the brother/sister duo’s new studio album Space Island – Out Friday February 18th.

Unquestionably one of the most gripping moments on Space Island, ‘Like a Woman’ encompasses a wildly shapeshifting sound. After opening on a sudden burst of harmony, the track retreats into desolate stillness before building to a gorgeously explosive bridge. Meanwhile, lead vocalist Georgia Nott’sdistinctive voice drifts from tender to soulful to impossibly fragile in its potent expression of the pain of being undermined.

She says, “To me that song very much reflects what it feels like to talk about things that have hurt you. You might start off like, ‘I think I’m all right. Although it did hurt. It hurt a lot, actually. I mean, yeah—it really fucking hurt.’ Or at least that’s how I tend to talk about these things. It’s still really hard to listen to this song almost 2 1/2 years after writing it, but I’m learning that, when I look a little deeper into the aches and pains, they all come from a place of love. Doing that gives me a way of seeing it in a non-judgmental way. Of being gentle and accepting of the things that have hurt me. “

For Georgia, ‘Like A Woman’ arrived to her like a visitor from another realm. “This one floated through the window and landed gently on my fingers while I was playing a Rhodes organ. It possessed me for no more than 10 minutes, but it left me with “Like A Woman”. I didn’t have any idea at the time how important of a song it would become to me. I hope people can feel as held as I felt when they hear it. “

Alongside the single BROODS also share the final chapter of the Space Island video trilogy. Premiering on Consequence Of Sound, the official video for ‘Like A Woman’ is directed by New Zealand film maker Sam Kristofski, who also directed the Space Island Chapter 1 video for ‘Piece of Mind’. The cinematic clip, filmed in their native New Zealand, is an extension of the B-movie-inspired videos shot on 35mm and 16mm of the first chapter, and follows the animated Space Island Chapter 2 video for single ‘Heartbreak’.

Georgia says of the music video, “This chapter takes us to the final destination in the Space Island trilogy; a harsh, desolate desert. A place to reflect on what’s happened with the perspective that space and time gifts you. For me it’s a place to name what I’ve been through and the person I’ve played to please others.  By naming it and facing it I can let go and move on from it and become a more authentic version of myself.”

In sculpting the forward-thinking yet nostalgic sound of Space Island, Caleb and Georgia mostly worked on their own in their home studio, occasionally joining forces with friends/producers like Leroy Clampitt(Ashe, FLETCHER) and Stint (Santigold, Carly Rae Jepsen). The album came to life during a period of serious upheaval for Georgia as she went through a difficult divorce soon after the release of BROODS’ previous album Don’t Feed the Pop Monster. As Georgia turned to songwriting as a means of processing her own grief, she and Caleb discovered an unlikely but wholly fitting vessel for their exploration of grief and all its many dimensions. “The aim was to make this album a very visceral experience, when you’re in that grief process, your whole body is in it—the feeling is so much deeper and more ambiguous than anything that can be explained in words alone,” says Georgia.

“BROODS’ new single ‘Heartbreak’ offers a pretty compelling — and optimistic — take on the matter…it’s a sleek, swirling breakup bop grounded by a sticky bassline, and it also comes with a video [which] is equal parts inward descent and intergalactic drama” – FLOOD Magazine

“BROODS are getting their space-age groove on with ‘Heartbreak’…a groovetastic, slicked-back, space-age bop” – Dork

“BROODS has found the light they deserve” – DuJour

“[‘Heartbreak’] is an icy-cold drink on a hot, hot day. Sharp, clean, and totally invigorating, this track’s got a full face of stunning features, from a flirtatious bass riff to sex-pop synthwork and come-hither vocals” – KCRW

“BROODS’s artistry is unmatched and it’s much appreciated that they are using their platform to educate and bring awareness to [mental health,] a topic that’s still taboo to talk about.” – Euphoria

“‘Heartbreak’ manages to be catchy, upbeat, somber, and reflective all at once” – Earmilk

“‘Piece Of My Mind’ is an electric thrill” – Milky