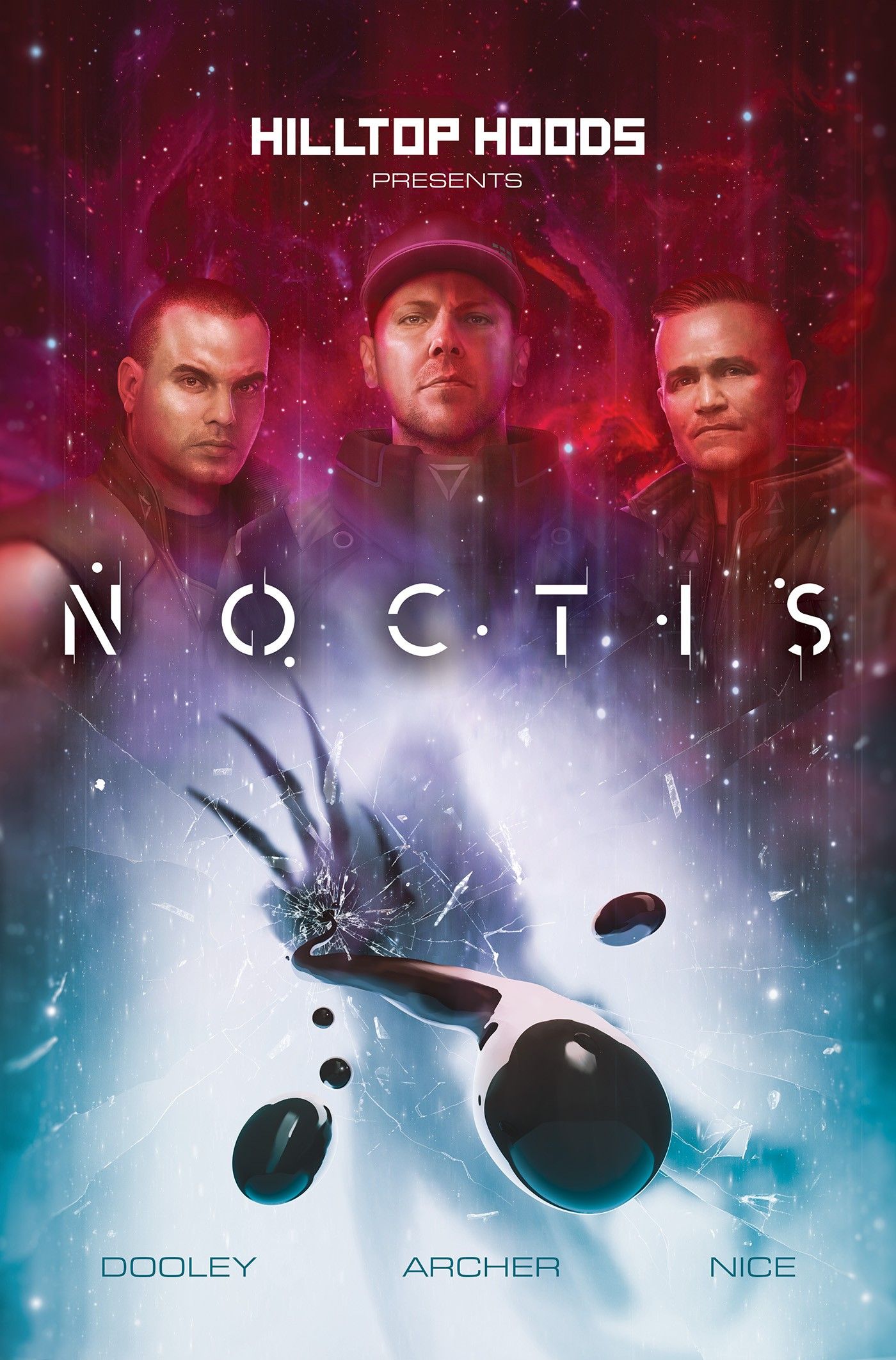 Z2 Comics continues to define the relationship between music and comics; bringing together the comics industry’s best talent with recording acts from around the world! (Gorillaz, Yungblud, Babymetal, Jimmy Eat World) For the first time, the leading publisher heads to Australia to bring one of the country’s biggest musical groups to outer space in Hilltop Hoods Present: Noctis this October; and available to pre-order though Z2 from here.

WELCOME TO SPACE STATION NOCTIS! Grab your standard issue Normality Normalizer™ and hang on to reality for dear life! Pressure, Suffa & DJ Debris are the Hilltop Hoods and Noctis’ newest inmates—er, recruits—when an anti-space incident infests the base with demonic aliens from another dimension! With the barriers between realities breaking down, it’s up to the Hoods to reverse the bleed before a nightmare god takes hold!

“’Getting to work with Z2 on a comic is the realization of a childhood dream. I grew up reading Deathlok, X-Force, Spawn and a host of others, I never thought I’d be able to play a part in putting a comic together, and Z2 have been so generous with their knowledge, resources and time. As for the writing and illustrations – I’ve been a fan of Tokyo 5 since it’s inception, Nice’s artwork is stunning, and Andrew Archer writes like someone who really understands how comic book universes should be constructed. Teaming them up with comedian Scott Dooley, who injected his sense of humour throughout, has resulted in a really exciting comic that everyone’s really proud of.” – Suffa from Hilltop Hoods

Written in partnership with the artists themselves, who are also characters in the book, Noctis adds writer Scott Dooley (The New Yorker) & Andrew Archer (The Tokyo 5) with art by Jeff Nice (The Tokyo 5), and will be released in comic shops and bookstores everywhere this October, with multiple editions available for preorder through Z2 now, including a deluxe and super deluxe edition, featuring limited edition art prints, vintage trading cards, sticker sheet and more!

When asked to collaborate on a comic with Hilltop Hoods and Z2, Andrew Archer said, “Ever since I saw the Parade of the Dead concert I knew the Hilltop Hoods would be down for anything; in the comic we throw monsters at them, we drown them in interdimensional ectoplasm and we blast them across a planet in a rocket car. They read our story idea, nodded their heads and said “We love it”. It’s been an absolute dream.”

Scott Dooley added “Suf had reached out to see if I’d be interested in helping write a comic and I jumped at the opportunity. The Hoods and I had known Andrew for a few years and really loved what he was doing so being involved was a no-brainer.”

Ten ARIA awards; 6 consecutive #1 Albums; Sold Out Arena Tours and over 50 x Platinum accreditations throughout their career so far. The legacy of Hilltop Hoods is already undeniable. They helped propel hip hop as a local genre in Australia.

In 2019 the band released their 8th and most recent studio album, The Great Expanse, the Highest Selling Australian Album of 2019 and has reached Platinum status. They toured as Main Support for Eminem’s Australian and New Zealand Rapture Tour, headlined the prestigious Splendour in the Grass and toured as part of The Great Expanse World Tour, playing to over 100,000 people in 14 different countries.

Hilltop Hoods have been a consistent and powerful live act throughout Australia, Canada, Germany, Austria, United Kingdom and Switzerland. In 2020, before COVID 19 hit,  the Group performed at the massive Fire Fight Concert for National Bushfire Relief following the devastating fires over the Australian summer, an event which raised over $11.5 Million.

As the music industry was decimated by the emergence of COVID 19 the band released the fundraising track ‘I’m Good?’ in May 2020,  with all proceeds from the song going to Support Act’s ‘Roadies (Crew) Fund’ https://supportact.org.au/give-help/donate-now/ to assist road and support crew within the Australia music industry.

Z2 Comics is the premier destination for official music-related graphic novels, created in partnership with top-tier artists, musicians, directors and pop-culture icons. Distributed globally via Simon & Schuster, Z2 has collaborated with such diverse artists as Blondie, Elvis Presley, Gorillaz, Machine Gun Kelly, Sublime, Yungblud, Cypress Hill, Babymetal, Major Lazer, Rico Nasty and Paul Oakenfold as well as debut comic works by Grammy-nominated artists Sturgill Simpson, Poppy and Anthrax. Additionally, the company has tapped top talent for the official graphic biographies of such pop-culture legends as The Grateful Dead, Beethoven and Charlie “Bird” Parker. In 2021, Z2 will publish graphic novel tie-ins to essential albums by The Doors, Ronnie James Dio, All Time Low with many more to be announced in the coming months.