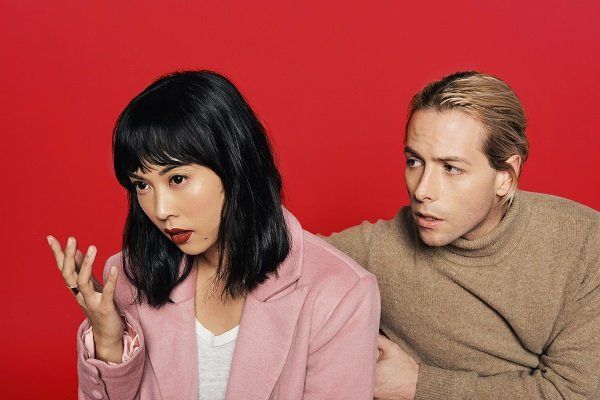 Today marks not only the release of the latest album from The Naked and Famous, Recover, it marks a cathartic reinvention and rebirth for a band that helped trailblaze the synth-heavy indie-pop genre in the 2010s with timeless playlist staples like ‘Young Blood’ and ‘Punching In a Dream’.

The release of Recover finds The Naked and Famous stripping down to the original core duo of Alisa Xayalith and Thom Powers to create a collection that is both deliriously effervescent and meticulously thoughtful, ready for both blasting on summer stereos and for dissecting its poetic lyricism.

To celebrate the release, The Naked and Famous will take to Cadenza today at 5pm (AEST) for a FREE global album streaming event, where they will perform cuts off of ‘Recover’ and classic TNAF hits: HERE.

Recover is an autobiographical record rooted in the human spirit with its 15 tracks woven together with themes of love and loss, life and death, fear and gratitude. The album title track, isa song that takes a heartaching look at losing a loved (inspired by the loss of Xayalith’s mother when she was a child) while the very real ‘(An)Aesthetic’ was written by Powers about his near-death experience with blood poisoning. ‘Bury Us’ explores the anxiety of diving back into love after heartbreak while encouraging messages of self-identity and gratitude permeate on tracks like ‘Come As You Are’ and ‘Sunseeker’ (the latter of which was inspired by Xayalith’s dog).

“A pandemic and subsequent recession is not an ideal time to release an album, but perhaps Recover is the musical message some people might appreciate right now. The album was anything but easy to make – it was fought-for. It’s about healing and resilience. Some songs take a very sober look at mortality. The title track ‘Recover’ reveals the grief Alisa still feels over the death of her mother (when she was only a child), and how that loss is re-punctuated each time she hits milestones in her life. ‘(An)aesthetic’; tells a story of ending up in a hospital with life-threatening sepsis brought on by severe food poisoning. Other tracks, like ‘Sunseeker,’ are celebratory. ‘Death’ looks at mortality through the eyes of romance, and the brief time we have to experience it. ‘Monument’ is a pure and honest description of heartbreak. “Recover” is an album about Alisa and I recovering ourselves both personally and artistically.“ – Thom from The Naked and Famous

While their breakout album Passive Me, Aggressive You inches towards its ten year anniversary this September, The Naked and Famous not only refuse to rest on the laurels of their past successes, but choose to dig deeper into the magic that have made them nostalgic heavyweights in the indie pop world: earnestly vulnerable, anecdotal and sincere songwriting paired with an expertly honed handle of the digital music landscape. While Recover is sure to inspire late-night living room dance parties, it will also reward careful listeners who connect to the stories of struggle, perseverance, and gratitude that serve as the emotional backbone of the album.