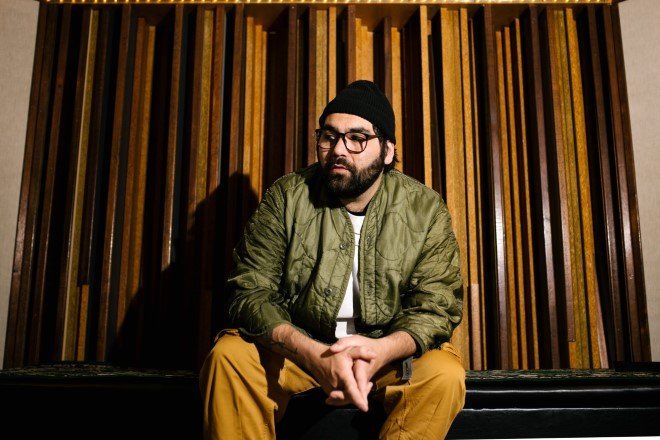 In stepping back from the mic, trials is set to make yet another loud impact with the release of his single and the official video for ‘i’m a f**king wreck’, (**= uc due to SPAM filters) the first taste of his debut solo project.

As both an MC and producer, and in the case of A.B. Original’s lauded Reclaim Australia, both –  trials is focusing his energy on producing and writing tracks with a diverse range of domestic and international artists. For his first single, ‘i’m a f**king wreck’, he collaborates with rising American artist and star in his own right, Daniyel. (pron. Daniel)

Buoyed by trials’ trademark production of big beats and warm guitar, the track nods to emo-rap as Daniyel lets loose a string of self-deprecating confessional thoughts. It’s a credit to trials’ production that ‘i’m a f**king wreck’ remains crisp and catchy despite the deeply reflective nature of the lyrics.

The partnership between trials and Daniyel began when trials was called up to work on beats for the Portland rapper’s own debut record. The two developed a creative understanding and began collaborating more closely, despite distance. From his home studio in Adelaide, trials wrote the track via calls and emails with Daniyel in 2020.

“From the records we were already working on together, I knew his range was boundless. He has such a rare tone I’ve never worked with before. It spoke to me immediately.” trials says. “The pockets he picks, the way he conveys emotions through subtle and overt styles: pain, promise, desire, you can feel what he’s saying through every one of his lyrics.”

Daniyel says, “I’m really excited to be a part of this amazing song with trials! I hope there’s a kid out there who can relate to what I was feeling when I wrote it.”

The accompanying video shot in LA and directed by Manny Madrigal and produced by Johnny Wong, features Daniyel delivering the lyrics as he moves through iconic locations. Creating a video across countries with border closures has meant that the video team have had to be creative about how to include trials in the clip. The result is a clip that highlights the emotive lyrics and the big beats of the song.

In seeking out and curating the artists for his solo project, trials is driven by the desire to keep growing and learning, never content to do the same thing twice.

“I keep constantly evolving my sound and palette. I see a song like a picture; if I’m just painting in black and white, it gets boring. Collaborators bring shade, someone brings contrast and colour, before you know it, we’re working together on a detailed masterpiece I would never have achieved alone.”

It’s this attitude that’s established trials as a go-to producer at home and overseas, one not bound by expectation or genre. He’s worked with his peers in hip hop Seth Sentry, Illy and Drapht; rock and punk acts like DZ Deathrays and Dune Rats & Ecca Vandal; and stalwarts of Australian music including Paul Kelly, Dr G Yunupingu and Archie Roach. Most notably, trials has contributed beats, vocals or both to just about every record from Adelaide firebrands Hilltop Hoods.

A Ngarrindjeri man from Coorong in South Australia, trials has spent his career demonstrating – either explicitly through his lyrics, or simply leading by example – the power and potential that comes with getting Indigenous artists in the room and giving them control. “Not only can we run this ship with whole hearted autonomy, we’ve been doing it.”

After more than a decade in the scene, trials has picked up 4 ARIA awards, a further 3 nominations and has been accredited 2 double platinum albums and 10 gold albums for his extensive work as a producer and composer. It was specifically A.B. Original’s debut that made people sit up and listen, winning the duo awards including the APRA Song Writer of the Year award, the J Award, the Australian Music Prize, the NIMA Awards Song of the Year, two AIR Awards plus a host of other notable awards and nominations. “I’m constantly representing my people by being one of the best by any measurement in any room you put me in,” trials declares.